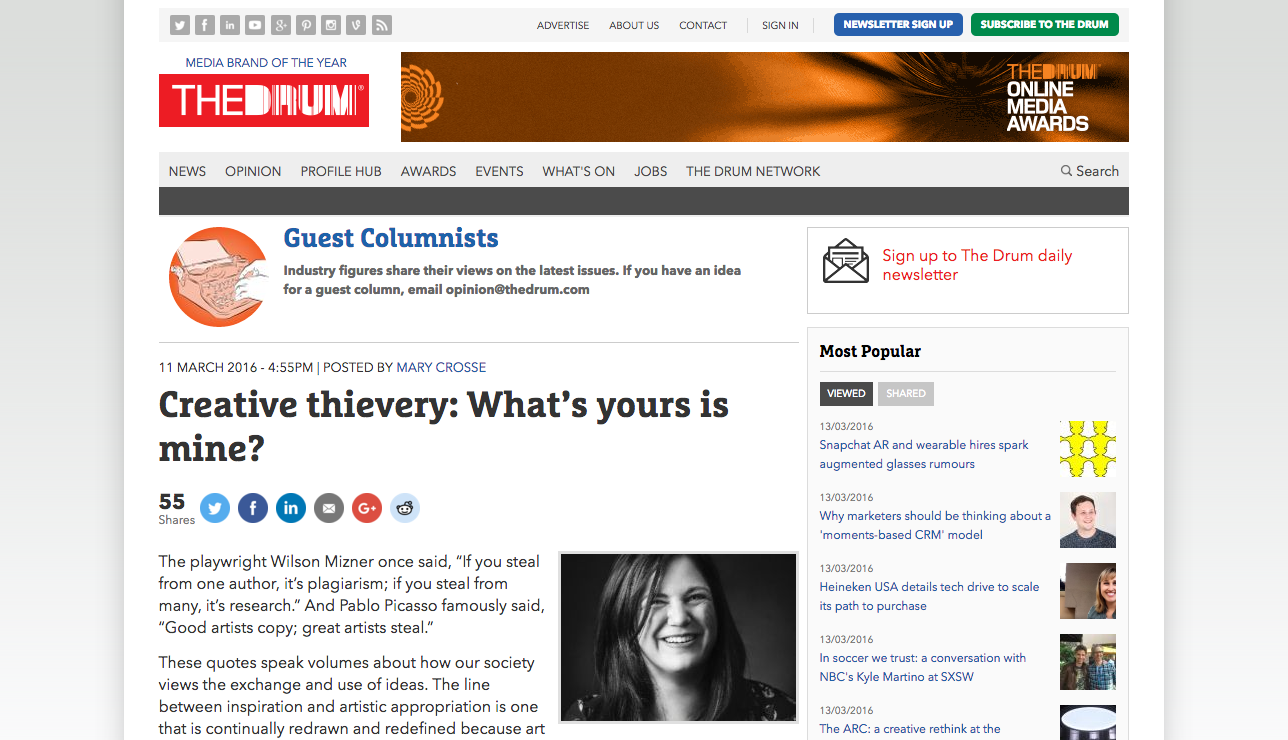 The playwright Wilson Mizner once said, “If you steal from one author, it’s plagiarism; if you steal from many, it’s research.” And Pablo Picasso famously said, “Good artists copy; great artists steal.”

These quotes speak volumes about how our society views the exchange and use of ideas. The line between inspiration and artistic appropriation is one that is continually redrawn and redefined because art doesn’t live in a vacuum. All ideas are influenced by the others that came before them. One of the most interesting aspects of this complex issue is how the discussion and the commonly accepted norms are shaped by context. What might be considered theft in one artistic medium is often considered little more than inspiration in another.

Recently, Beyoncé was accused of stealing footage for her latest music video without properly crediting the filmmaker. This was ultimately unsubstantiated, but it was an interesting example of how passionate people are about artistic appropriation as well as when artists are not seen as authentic in general, a la the Meek Mill versus Drake ordeal last summer.

This cycle of theft vs. creative inspiration accusations really never ends and the reality is that artistic appropriation happens across industries:

In advertising, originality is valued, but appropriation is often a driving force behind many creative ideas. While advertisers are very serious about the proper use of copyrighted work (in that most agencies wouldn’t intentionally steal a photo, fonts, music, etc. without clearance), the less tangible ideas are often fair game.

Being relatable and culturally relevant is the goal for advertisers with so much of the content they create, which means that many ads are working to distill down the aesthetic and ideas of the moment, rather than working to create new ones. Advertising agencies are often required to reference other works in order to sell through an idea to their clients, and it’s the norm to license at least some element of a campaign from an artist. But it’s the overall concepts and content inspired by other works that are harder to track.

In visual art, many artists wear their inspiration on their sleeves, but some go further than others, turning appropriation itself into an art form. Artists such as Richard Prince,Jeff Koons, Mr. Brainwash and Andy Warhol before them have re-contextualized images in such a way that we’re forced to think about what makes something “original” at all, and if that’s what’s even important.

In the case of Richard Prince, he took other people’s Instagram photos and displayed them as fine art – some of which were sold for upwards of $100,000 each; there was even a piece of Prince’s art he appropriated from another artist that was sold for $3.7m at an auction. The stolen Instagram photos opened a new door into a completely new contemporary art moment for the artist, adding “another wrinkle to his modern meta-take on sex, art and appropriation,” according to Quartz.

In music, the way we look at appropriation has undergone a massive transformation since the birth of hip-hop and the rise of sampling, which was first thought of as theft by many outside the genre. While it’s now deemed acceptable – with the proper permissions – we still see musicians suing each other for plagiarism, as in the recent case of Tom Petty vs. Sam Smith (which Petty won). And there are still grey areas where the question of appropriation is murky for artists like Girl Talk, who rely almost entirely on the creations of others to make their own music.

In fashion, copying is rife – and sometimes totally acceptable – having hit everyone from up-and-coming designers to high-fashion brands such as Celine. It’s very difficult to copyright a fashion design, a reality that gives the industry more freedom to borrow from each other and simultaneously gives them less protection. While fast fashion retailers’ blatant rip offs of last season’s runway looks are often seen to be crossing an ethical line, they are very rarely taken to court for it. Though, there are some notable exceptions: retailer Urban Outfitters, for one, is no stranger to coming under fire forcopyright infringement after using an artist’s work without permission.

Overall, I think that appropriation or sampling in general is not about stealing, rather, it’s about taking something that had a different intention and recreating it with a new spirit. So plagiarism is completely different from appropriation. Even though Richard Prince’s work, for example, goes to the extreme of appropriation to the point of directly and clearly stealing someone else’s photographs and art, he is making a statement in doing so – in other words, his act of stealing is an art in of itself. But because the definition of ‘who is owed what’ is so inconsistent in culture and in the law, this is a very important, constantly evolving conversation in our industry and beyond.

At SXSW this year, we’ll be diving deep into this topic with a panel titled, “Creative Thievery = What’s Yours Is Mine,” where we’ll discuss where the line is drawn (or should be drawn) between artist inspiration and just plain theft.

Manage Cookie Consent
To provide the best experiences, we use technologies like cookies to store and/or access device information. Consenting to these technologies will allow us to process data such as browsing behaviour or unique IDs on this site. Not  consenting or withdrawing consent, may adversely affect certain features and functions.
Manage options Manage services Manage vendors Read more about these purposes
View preferences
{title} {title} {title}